Manuals may be praised by car enthusiasts, but if you visit your local drag strip, you’ll find most people are running automatics. What is it that makes these transmissions so popular, and how can you use one to cut your ETs? 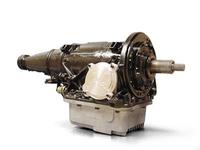 When You Think “Automatic,” Think “Planetary”

Most automatic transmissions are built around a planetary gearset. Even “manual” transmissions used on top fuel dragsters use this design, allowing the driver to operate the clutches to shift gears instead of using a valve body.

A planetary gearset uses three sets of intermeshed gears. To shift gears, the transmission switches which sets are connected to the input and output shafts. This is faster than disengaging a synchro and engaging another synchro in a manual transmission.

A stock transmission is built to provide smooth shifts and good fuel economy. By changing the clutches, valve body and torque converter, a planetary gear transmission can change the gear connection quickly and keep the engine running at high RPM to get power down faster than a traditional manual.

This fluid transfer device replaces the clutch on a manual transmission. The engine drives an impeller which moves fluid to push the turbine connected to the transmission input shaft. In between these parts is the stator, which pushes circulating fluid back to the vanes of the impeller. Modern converters also have a lock-up clutch that connects the turbine and impeller directly, eliminating fluid power loss. If the converter isn’t locked, the impeller can spin faster than the turbine, increasing the force of the fluid which multiplies torque. This means shifts can happen immediately, whereas the engine speed must drop for the flywheel and clutch speeds to match when shifting a manual. This torque multiplication also allows automatics launch harder than manuals.

The stall speed is the maximum speed the engine can be at before it can’t overcome the hydraulic pressure in the torque converter. At this point, full force is applied to the turbine and the wheels must start turning. True stall speed can only be measured using a trans brake, which locks both first and reverse gears at the same time to keep the car from moving. Used together, a high stall speed converter and a trans brake allows the engine to rev up to its peak torque band before launch. Putting a transmission in two gears at the same time is hard on internal components, so most street-driven drag cars use the brakes to hold the car back instead.

Contrary to popular belief, stall speed is not how fast the engine needs to be turning for the car to move. There’s still some power transfer below this speed, letting the car be driven normally; issues with drivability usually don’t occur unless the stall speed is over 3,000 RPM, which is well within the start of the peak powerband on a heavily modified V8. That’s a big jump from the near-idle speed of a stock converter, and it can mean launching your car near its peak output, shaving serious time off or your runs, especially at the 60-foot mark.

If this is starting to sound complicated, don't worry: we carry Performance Automatic transmissions, which are built around the C4, a three-speed automatic that Ford built from 1964 to 1981. Originally used with straight 6’s and small block V8s, this design can be modified to handle enormous amounts of power. They take the guesswork out of shift points and stall speeds, using race-proven formulas so you can get something that will work with your engine.

These transmissions are available in case fill and pan fill versions. While factory pan fill versions have a reputation for strength, there’s no real difference in durability with a performance transmission. This makes choosing a transmission a matter of fit: bellhousings aren’t interchangeable due to the shape of the cases, and the long dipstick tube on the pan fill transmission may get in the way of some headers.

Want to get better performance from your stock transmission? We also offer a TransGo shift kit to get better shifts out of the AOD used in Fox Body (86-93) Mustangs. 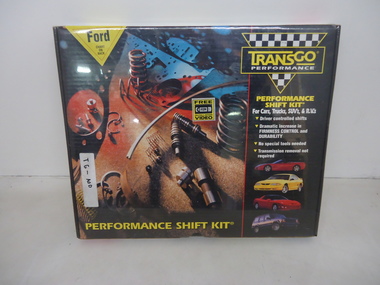 Get the Transmission You Need for the Strip

Anderson Ford Motorsport doesn’t just sell Mustang parts, we’ve raced in NHRA and have spent over three decades testing and developing performance parts for Mustangs. Whether you decide to go with an automatic or a manual, we have everything you need from complete transmissions to shifter and bellhousings.